BokBot, also known as IcedID, was among one of the most active malware families in 2021 and has been known for loading different types of payloads such as Cobalt Strike for example. BokBot has previously been linked to ‘NeverQuest’[1] and over the years it has gone through various code changes.

The following article presents the findings of analysis conducted on samples which appeared in December 2021. Furthermore, the analysis focuses on the main module and its network communication features and functionality. Overall, BokBot has the typical features that you would expect from a banking trojan. Specifically, BokBot presents the following features that are notable:

The following sub-sections present the findings of the analysis of the main module of BokBot.

The biggest obstacle in analysing BokBot was the way in which the loader loads and executes the main module. BokBot’s main module runs, in memory, as pure shellcode. As a result, dumping the decrypted component and running it directly in a debugger was not an option. Furthermore, if we consider that binary strings and Windows API functions are loaded at runtime, similar obstacles are met during static analysis too.

To workaround the above issues, different methods were used. Initially, the Unicorn engine was used to execute and debug certain functions; this was useful to confirm that the strings decryption algorithm has been correctly converted to Python for example. In cases where this was not possible, a debug session was started by breaking at the entry point of the main module and moving on from there to selected addresses.

The static analysis issues were easier to solve. Upon breaking at the entry point of the main module, the resolved Windows API addresses and their associated (BokBot) addresses were collected and then mapped to IDA. Lastly, the strings were decrypted by converting the decryption routine to an IDAPython script (see ‘Strings/Configuration Encryption’ section).

As with many other malicious binaries, anti-analysis techniques are employed to make the analysis harder. The following methods were observed:

If any of the above techniques are triggered, Bokbot will continue anyway but inform the command-and-control server.

Regarding BokBot’s behavior in case of anti-analysis identification, the only difference, at least from a binary perspective, appears to be in the execution of ‘BackConnect’ functionality (described in the Network Communication section); specifically in this case the operator(s) should issue the feature. Otherwise it executes the ‘BackConnect’ functionality as normal in a new thread.

BokBot keeps its binary strings in an encrypted format with each string being decrypted only when it is about to be used. An IDAPython script that automates the decryption process is available on GitHub.

Likewise, BokBot’s configuration is encrypted, with the configuration being stored in the ‘.data’ section of the loader. The main module obtains a pointer to this section by reading a parameter passed into it by the loader. It is important to note that this parameter stores several pieces of important information including:

With this, it is able to decrypt the configuration; a Python script to replicate this is available on GitHub. A notable mention with regards to the configuration is that BokBot, unlike some other families, keeps it in a decrypted state for the entire execution time. This can be an important factor either for writing a memory configuration dumper or to obtain the configuration as fast as possible during an IR engagement through memory image analysis.

Lastly, it should be noted that unlike previous versions, debug strings appear to have been removed.

BokBot supports two methods to add persistence on the compromised host. First, BokBot copies its downloader to the user’s Roaming directory (%APPDATA% environment variable) and attempts to create a scheduled task to run it. If this fails, BokBot proceeds to use its second method, which adds a new value in the ‘Run’ registry key of the current user (HKEY_CURRENT_USER).

Note: In both cases, the scheduled task and the registry key names are randomly generated. In addition, BokBot’s encrypted main module file (DAT file) is added as a parameter of the downloader. This is an important artefact from an incident response perspective whilst analysing suspicious registry keys or scheduled tasks.

One of the core features of BokBot is its ability to intercept browser information. BokBot is capable of targeting the most commonly used browsers including Chrome and Firefox. Upon detecting a browser process, BokBot binds to a random port (calculated based on the generated bot ID), creates a self-signed certificate and waits for new events.

BokBot uses the same decryption routine as for the configuration to decrypt the appropriate shellcode, supporting both x86 and x64, and injects it into the browser process. The role of the injected shellcode is to hook Windows API functions that are used during the transmission of network data. This is an approach that many malware families have followed for years in order to intercept data before any encryption is applied.

With the appropriate shellcode injected into the browser’s process and the (BokBot) server running, BokBot is capable of intercepting sensitive data (man-in-the-middle).

BokBot stores necessary data such as web-injects in the registry of the compromised host. The key is located at HKEY_CURRENT_USER\Software\Classes\CLSID\Random_Key_Name, where Random_Key_Name is generated based on an MD5 hash value derived from the bot ID and a custom hashing algorithm.

BokBot supports a variety of network commands. Since it supports both HTTP(S) and network sockets, this section has been separated into two parts.

Upon execution, BokBot starts communicating to the command-and-control server via HTTP(S) requests. BokBot starts by sending a POST request in order to check if there are any commands to execute. The request contains host information such as Operating system version along with a generated bot ID. The bot ID is included in the headers of each request, see Table 1 for a brief description of headers. The initial request body includes the following information:

Once the command-and-control server receives the request, it replies with a set of command IDs that BokBot should execute (Figure 1). 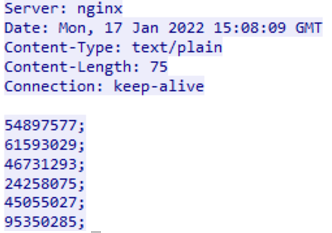 The below table summarises the identified BokBot HTTP commands (Table 2).

After executing a command, BokBot compresses the data using the Zlib library and removes the first two bytes ‘0x78 0x9c’. Then, it constructs a POST request with a specific URI (each command has its own URI parameters hard-coded) and sends it to the server (Figure 2).

The ‘BackConnect’ functionality provides the operator(s) an additional set of available commands and uses the same command-and-control server as before. Upon successful connection to the server, BokBot registers a handler and waits for data. Note: The used port number is 443.

At this point BokBot will perform a different set of actions depending on the status of the connection. For example, if there is a connection time-out then it sends a request to the server with command ID 2 (proceeds to internal command dispatcher) and waits again for new data. In general, BokBot uses the following structure when sending socket data:

The above packet is added to another structure, which BokBot uses as a header, in an encrypted format. The data is encrypted using a bitwise XOR operation with the random key being stored in the packet header (see structure below).

Note: If the command’s size is greater than 126 bytes then the structure’s fields are different but the concept remains the same.

Considering the above information, the important functionalities of the Back-Connect feature are triggered once data is received. The data is decrypted either using a bitwise XOR operation, using the key stored in the packet header structure, or by using the DecryptMessage API function. The decryption method selection is based on an integer flag that is initialised during the connection.

Next, BokBot checks if the first byte of the encrypted network packet matches any of the below values:

In the first case (value 2), BokBot proceeds to its internal command dispatcher and performs another check of the first byte (command ID) of the decrypted data with the following values:

Regarding command ID 1, BokBot creates a new thread for each new received IP address that it should connect to. Furthermore, after connecting to the new IP address, BokBot sends a request with command ID 0. It should be noted that the structure of the requests and replies are different compared to previous cases:

Then, the server replies with the same data structure. The available command IDs are:

Throughout the connection session, BokBot sends a command with ID 1 as a beacon to the server, waiting for new data.